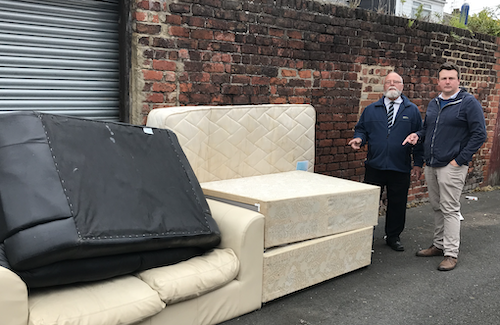 Lib Dem councillors on Wearside say charges to pick up waste that's too big to fit in wheelie bins has led to a fly-tipping 'epidemic' in parts of Sunderland. The Local Government Association (LGA) represents all local councils across the country.

The LGA said councils did not have enough funding to properly tackle the problem, called for local authorities and the courts to be given greater powers to fine and prosecute those responsible, and said that councils introducing charges for bulky waste collections has contributed to the increase in dumped rubbish.

The 'bulky waste' collection charge in Sunderland has been blamed for increasing fly-tipping in the city. It currently costs £22.50 plus a £5 surcharge for sofas, fridges and freezers.

Now the opposition Lib Dems on the Council want it axed.

"The Local Government Association are absolutely right that councils need more funding and greater powers to deal with and investigate fly-tipping which has reached crisis point in my part of the city in Pallion, as well as places like Millfield, Hendon and Southwick. That's why Lib Dem councillors voted at Sunderland Council to urge the Government to review funding for local authorities.

"However, Sunderland City Council needs to take its fair share of the blame here. For years they have ignored the outcry from residents who are up in arms at the state of local streets and back lanes which are suffering from a fly-tipping epidemic. "The Council has chosen to cut the number street cleaners and other staff dealing with fly-tipping and are only now starting to invest in these services when it's too late. They've also introduced and increased charges for 'bulky waste' collections - and they wonder why more people are fly-tipping!

"Sunderland Council should stop wasting money on vanity projects and free meals for councillors and instead employ more street cleaning staff as well as - crucially - axing the bulky waste collection charge to make it easy and affordable for people to do the right thing and get rid of rubbish responsibly."